During her recent tour of Australia, Madonna brought a 17-year-old girl on stage, groped her breast, and then deliberately exposed it to thousands of concertgoers in Brisbane. The majority of attendees had access to cameras or phone-cameras, which were able to capture the incident in more than sufficient detail. No charges have been laid yet and Madonna is presently in a bitter child custody dispute with ex-husband Guy Ritchie.

In Australia, like most other countries, there are severe theoretical penalties for both sexual assault and producing nude images of minors. I say theoretical because these provisions are invariably not used to punish women, from female teacher sex abusers to girls who have sex with incapacitated men.

What we are witnessing, and not just with the Madonna debacle in Brisbane, is a new peak for female privilege. Women can condemn men to time in prison for mere allegations, often interspersed with inconsistencies and proven lies, while women commit these same acts on camera with no repercussions. The 17-year-old girl groped and exposed by Madonna, Josephine Georgiou.

The initial claim from the Material Girl singer’s camp was that the exposure of Josephine Georgiou was unintended, but this does not explain Madonna’s initial groping or the fact that just before she pulled the top down she said, “She’s the kind of girl that you just want to slap on the a** and pull…”

Having read about and researched what happened, I waited for some sort of rebuke for Madonna from the powers-that-be, irrespective of whether they would charge her. Nothing came. Media personality Piers Morgan did launch a stinging attack on her, but it meant much less when we consider the pair have been at war for a long time. Some who comment on stories like this typically say that the girl in question looks older and that age-related consent and nudity laws are “arbitrary.” That may be so, but there is almost always nothing arbitrary when a man defies them. He is charged, dragged through the court of public opinion, convicted by an actual court, and branded a sex offender for life, both officially and unofficially. Plus, when she was less made-up and sought more celebrityhood via a TV interview afterwards, Josephine Georgiou did look younger.

Georgiou, an aspiring model, labeled the encounter “the best moment” of her life (what does this say about modern girls?). Two unfortunate realities make this confession close to meaningless, though. First of all, both men and women have been taught to believe that women cannot usually be guilty of sexual crimes, even when there is incontrovertible evidence and the same act is considered sexual assault when done by a man. In Ireland, for example, police charged a 16-year-old boy for statutory rape when the female “victim” was the same age. If the boy were a girl, his reported mental illness and dysfunctional family situation would mean that the charges would likely have already been dropped.

This Irish farce is reminiscent of the scandal at the elite Milton Academy in Massachusetts some years ago, over which boys were forced to admit fault for having sex with a girl. The girl herself was not charged for performing oral sex on an underage 15-year-old boy. Such laws almost always reflect the widespread belief that “women cannot be sex offenders.” Even when they are repealed, the thinking behind them, including when prosecutorial decisions are made, remains firmly intact.

Secondly, and primarily in relation to the exposure, the girl is underage. No amount of “I was fine with it” changes that people under 18 cannot consent to being filmed whilst naked. This had nothing to do with “art,” nor did the footage center on something like a private video of teenage friends sunbathing topless at a beach. Rather, the act was beamed around the world and, more to the point, in front of thousands of people present. 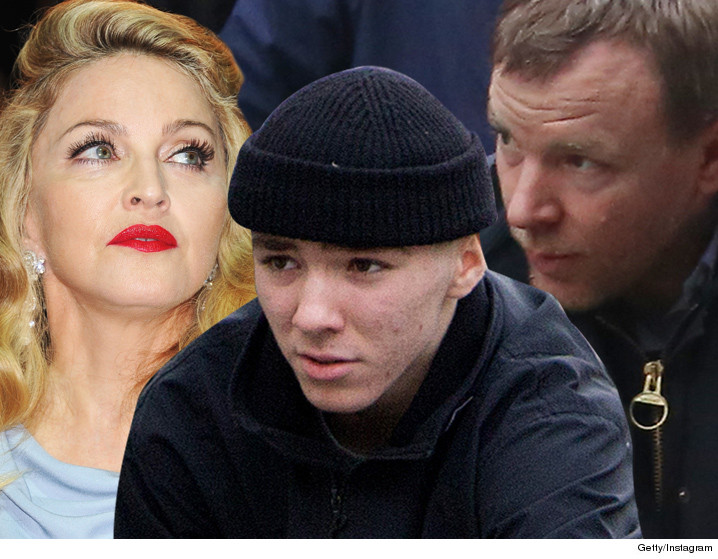 Madonna’s strange behavior started long before the Brisbane incident, yet has had no real impact on her child custody chances.

How many fathers can safely say they could grope an underage girl in public, expose her, and then find themselves without consequences during an acrimonious child custody dispute? Not many, and Madonna’s ex-spouse Guy Ritchie would not be one of them. Despite a wholesome preexisting image (it takes a saint to put up with Madonna’s noted diva behavior, after all), he would not be afforded the benefit of the doubt, let alone the pathetic excuses handed to his former wife.

As I said before, it would be nice if the lack of legal consequences for Madonna were mitigated by greater social condemnation of her. At a time when sexual assault is supposedly a major issue, albeit through hysterical witch-hunts like the one that flared up again against Jian Ghomeshi, the silence is deafening.

I get rather sick of saying this sort of thing, but the public nature of what Madonna did at least shows the double standard for what it is.

In the end, men and women are different. Some hypocrisies, however, are much more intolerable than others and must be challenged.