San Francisco, Calif. — Recently, a pre-natal exam has become available to screen for homosexuality among male fetuses, and the results are devastating; among fetuses diagnosed with homosexuality, 90% have been aborted.

The test is highly non-invasive; nurses obtain a sample of blood from the mother, and measure the levels of free-flowing estrogen released by the fetus into the bloodstream. When the fetus is male, heightened estrogen levels indicate that the fetus is in fact homosexual. Test results are further confirmed by an ultrasound of the fetus, which technicians use to assess the angle of wrist flexion:

Male fetuses with over 30° wrist flexion or extension are over 99% likely to be homosexual. When these results are combined with the estrogen level figures, the test correctly identifies homosexual male fetuses 99.9% of the time, with a false positive rate under 0.1%. The test was developed by researchers at Uganda’s Makerere University’s School of Medicine, under a grant funded by the Ugandan national government.

The test has caused quite the schism among formerly tight-knit progressives. Feminists have defended the use of the exam and any abortions that ensue from it, saying it is a woman’s right to abort for any reason, at any time.  Even some lesbians are coming down on the side of choice. Said one, “The main thing is that the act homosexuals commit is ugly and repugnant and afterwards they’re disgusted with themselves. They drink and take drugs, to palliate this, but they are disgusted with the act and they are always changing partners and cannot be really happy…. In women it is the opposite. They do nothing that they are disgusted by and nothing that is repulsive and afterwards they are happy and they can lead happy lives together.” With the surging popularity of in vitro fertilization among lesbian couples, these choices are being made by everyone. Proponents of choice have cited the threat of back-alley abortions with wire hangers, if abortion is further regulated.

Meanwhile, queer men are up in arms at the prospect of a diminished future. Dr. Toby F. Gott of Wesleyan University’s Feminism, Gender & Sexuality Studies (FGSS, pronounced fægz for short) said, “imagine if these tests remain legal, their use surges, the population of buggers will decline. Who will lead Zumba classes to whip overweight single women into shape? Who will have both the strength and the grace to push those food carts down airplane aisles? Who will wear Ed Hardy? We are talking about a homocaust here.”

Meanwhile, Republicans are still trying to convince the nation that (1) they are sodomite friendly and (2) are not actually sodomites themselves. Recent epiphanies surrounding Republican politicians belie that, however. 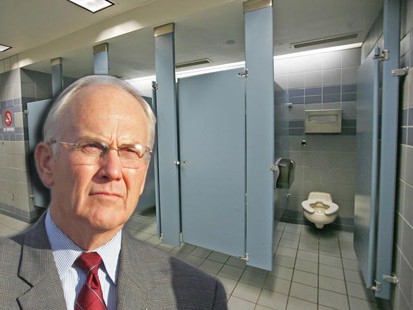 A Republican And His Favorite Meeting Grounds

With the nation’s great and good lining up on both sides of the debate, the outcome remains to be determined.

Read Next: 7 Traits Of The Male Feminist