At last, the other woman who assaulted Roosh in Montreal, Katie B. Nelson, has been identified. The literal partner-in-crime of Jessica Lelièvre (now strangely a law student) has desperately tried to avoid being outed for her anti-social, criminal behavior in August of last year. She saw the very adverse reactions towards Lelièvre, who was forced to go underground away from social media and now faces the likelihood of having prospective employers permanently associate her name with the organizing of an attempted lynch mob.

Nelson was the first woman to throw a beer on Roosh in this video:

After Roosh’s World Tour, Nelson has been finally banned from Twitter for harassing multiple people. These people have included purported Roosh supporters whom she has stalked online and tried to stir up offline violence against. Inasmuch as we welcome her banning, Twitter was extremely slow to act appropriately when Nelson’s nefarious intentions became clear. Many complaints of doxxing were made against her before she was suspended indefinitely. By contrast, Milo Yiannopoulos’ legitimate investigative journalism about college graduate fraudster (and transgender person) Brianna Wu was immediately shut down by Twitter.

You can find Nelson’s remaining social media pages, where she has an ironic penchant for objectifying herself well beyond her natural appearance, here: Facebook and Instagram. Most disgustingly, we also have a snapshot of her unabashed anti-Semitism and support for the tunnels used by terrorist group Hamas to murder Jewish-Israeli civilians. And Roosh is supposedly an anti-Semite?

Katie B. Nelson’s may actually just be Caitlin Nelson, based on her 2013 arrest. Nelson is probably well aware of the professional consequences she might face in the future for her deplorable past, so it’s possible that the “B.” is either a complete ruse or a legal initial she uses on and off to separate her different activities, like with her appropriation of both Katie and Caitlin as first names.

In Montreal, after hitting Roosh with their drinks (a crime in Canada, as multiple court decisions prove), Lelièvre and Katie B. Nelson duly slip behind their slavish white knights but continue trying to fan the flames to create more dangerous levels of physical violence. The men, followed by the “brave” women, proceed to force Roosh and his smaller entourage down the street, on pain of risking being maimed or even killed. Roosh gave much more than a middle finger to his enemies in Montreal and wider Canada. He schooled them in how to beat a mass of leftists frothing at the mouth for blood.

Roosh’s recollection of “Jennifer,” the name Katie B. Nelson gave herself, is as follows: “I approached her on the street and then I moved into the bar. There she was making cow eyes on me and rubbed her legs against me to distract me until her white knights could get there. Her act was quite believable (I felt foolish afterwards).”

In terms of why he didn’t press charges, Roosh said, “A detective from the Montreal SPVM police force contacted me and said that I should expect to also be charged with assault because I allegedly threw my water at Katie’s face after she attacked me first. If I did such a thing, it was a self-defense reflex to fend off my attackers. The last thing I wanted to do was return to Canada for a trial, so I didn’t pursue charges. I had to assume that a Canadian judge would throw the book at me while giving leniency to the girls after they turned on the water works in the courtroom. This shows that if you want a woman to go to jail for assault, you better not try to defend yourself.”

“It’s only mean or violent when the patriarchy does it!” 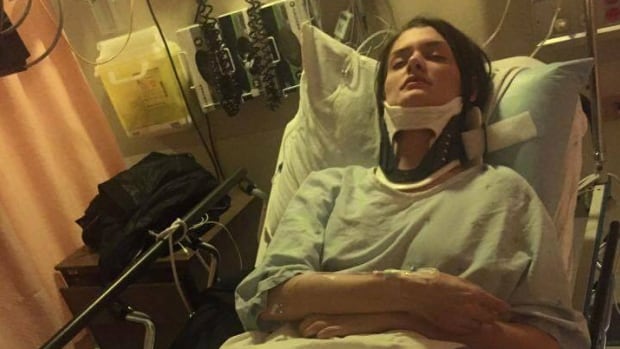 Isn’t the idea of ambulance-chasing to do up the velcro strap of your neck brace? Katie B. Nelson/Caitlin Nelson is presently suing the Montreal Police for alleged brutality. Makes perfectly sense that an anarchist would use an “illegitimate” capitalist court system in this way, right?

Proving that feminist complaints about being doxxed never apply to those who criticize them, Lelièvre and Katie B. Nelson were instrumental, along with Sara Parker-Toulson the Hutt, in disseminating Roosh’s alleged Montreal address. The intention here was to have people show up to render Roosh unconscious, beat him to within an inch of his life or, again, end his life. Yet do not take my word for it; the evidence is both linked to my articles and across the broader internet.

In the biggest irony of the whole saga, it was feminist-anarchist Katie B. Nelson (or Caitlin Nelson, take your pick) whose actions helped bolster the already very heavily supported proposition that rape culture is not just a myth but also a deliberate SJW fiction. Women can and do lie when it suits them during flirting, courtship, and sex. Knowing exactly who Roosh was, Nelson pretended to be unaware and sexually propositioned him, entirely for the purposes of soon attacking him and unleashing the assembled sheep-like mob.

The only thing Katie B. Nelson doesn’t want to liberate is her drug-affected “intellect.”

Katie B. Nelson comes across as a most unsurprising ultra-leftist figure: “former” homeless drug addict; feminist-anarchist whose political activism depends on living in a tolerant, productive First World Western country; street radical who cries “Police brutality!” at every corner; and someone with a phenomenally maladjusted background and childhood. Some people overcome their past, whereas people like Nelson let theirs consume them and deliberately play it up for attention and “street cred.”

Let’s take a look at Nelson’s own “story.” In a narrative that’s par for the course with self-obsessed SJWs, Nelson claims she had to “leave behind one of the most amazing children I have ever met.” Whether this means she very stupidly and recklessly had a son or daughter she gave up, or just wants to make her life sound dramatic and so involves a child who isn’t hers, remains to be seen.

She additionally assists in vindicating the basis of so many ROK articles, including my recent one about how women reward violent men with sex and relationships. I, like many of you, do not find Nelson aesthetically-pleasing, but the general principle of a damaged female’s preference for anti-social men works well in her case. She very explicitly references a habit of “getting into relationships with abusive piece-of-shit boyfriends.”

The commonalities between Katie B. Nelson and her ideological bosom buddies, like Jessica Lelièvre, are the ones you have come to expect from the most opportunistic feminist attention-seekers. Naturally, there’s that obsession with enhancing their appearances well beyond what nature gave them. Nelson is the same girl who will rally against patriarchy and unrealistic physical expectations on women in one breath, and then plaster herself with copious layers of make-up and digital filters in the next. These hypocritical actions are merely shortcuts for propping up her flagging self-esteem. A girl’s gotta do what a girl’s gotta do.

No doubt, Katie B. Nelson/Caitlin Nelson will claim the tweet above was a joke or a “thought experiment.” SJWs always do when their future employment prospects are limited because of statements that would blacklist a non-leftist for eternity. How strange then that such a comment still fits within her putrid overall ideology, including not merely an unfavorable comparison of Israel with Nazi Germany but rather saying Israel is Nazi Germany:

Then there’s her wonderful encouragement of Hamas wilfully murdering Israeli civilians, mentioned earlier. All in all, we are left with an impression of a virulently unhappy and mentally unstable “woman” (more like a child), who lashes out with calls for violence, requests for other people’s money (see below) and presenting herself, almost schizophrenically, as a target of continuous police harassment.

Prostitution is more much honest than Katie B. Nelson’s crowdfunding efforts.

Before we address her shameless profiteering and refusal to get a job able to fully support her activism, there’s the tricky question of why an anarchist would try to get a payday via the civil, capitalist court system. This is exactly what Katie B. Nelson/Caitlin Nelson has been doing and is the main reason ROK became aware of who she was. She claims she was “pushed” at a rally by an undercover police officer and is suing the Montreal Police. This continues her multiyear obsession with portraying herself as a victim of “police brutality.” Of all the sick SJWs in Canada, she’s miraculously the one being “targeted.” In psychiatric terms, this would be called epic and never-ending narcissism and paranoia.

She has raised, for her at least, substantial “legal fees” funds online, including on GoFundMe (archive) and Generosity (archive). For someone with the gall to make a name for herself pretty much only through “combating” police, surely she could muster the discipline to parlay her “skills” in getting a decent job to fund her extremism. And as a social justice warrior who believes in the power of Montreal’s anarchist collectivity, she has a quaint habit of making herself the sole public standard-bearer for the cause.

These funding drives intersect with other serious questions about Nelson’s finances. She repeatedly shares her long history of drugs and being homeless, yet has the time and money to study at Concordia University, the alma mater of Jessica Lelièvre. Comparable to Lelièvre, Nelson might have an affluent family in her home province of Alberta. The suggestion is that she hails from Edmonton, a not-so-bad city that benefited from a contemporary boom from oil and other resources. But unless she has resorted to living off white knight men, actual prostitution, or her family, how she bankrolls herself with all these legal entanglements is very murky indeed.

There is just not enough room for more facts about Katie B. Nelson

I thoroughly encourage you to peruse the main forum thread on Katie B. Nelson/Caitlin Nelson. I have no doubt that more about her is out there and this may soon appear, thanks to the contributions of Roosh and ROK supporters. For now, this exposé must regrettably (or thankfully?) come to an end.

I have lost count of the number of times I have mentioned SJWs’ flair for outing themselves. They so desperately believe in their false creed and their broken selves that they cannot help but confirm their mental illnesses, crimes, and other brain-dead positions and activities.

Of any SJW I have ever had the displeasure of covering, from rich daddy’s girl Jessica Lelièvre to the truly awful Anita Sarkeesian, Katie B. Nelson is without a shadow of a doubt the most repulsive and delusional. Enjoy your notoriety, Katie. Once what little of your non-make-up-generated looks have been sapped by your long-term drug abuse, the life of needles and deliberately sought out violent men will be even more familiar to you than it was before.