Jon is a part time misanthrope, full time American. Jon loathes modern academia, art, culture, literature, politics, television, and everything on god's green earth that has been inundated with boring, predictable, impotent, vapid Cultural Marxist horseshit which, mind you, is totally void of a single individual thought. Jon just realized he is a full time misanthrope. Anyways, Jon prays for this to change one day and something new to come along. Until then, Jon remains pessimistic with a loaded .357 next to his bed. Jon can be reached at [email protected]

For one, the Pew Research states “Women lean Democratic by 52%… unmarried women 57%”. In a similar article, “Since 1990, women have been consistently more likely than men to identify as Democrats or lean Democratic.” Nothing is closer to socialism and statism in modern America than the American left and the Democratic party. In case you didn’t know, they have an actual socialist running in the primaries. The Democratic party continues to represent women and their beliefs of security and collectivism.

You Must Love Big Brother

The ultimate caricature of the left, Hillary “the woman” Clinton, illustrates her ideas of collectivism in her creepy 1996 Communist Manifesto, It Takes a Village. The title of her book itself should give you shivers. The book illustrates its eerie socialist message of collectivism and state security. An excerpt from the Chapter “Brave New Village” from Jonah Goldberg’s book, Liberal Fascism, exemplifies Clinton’s idelogy of state controlled community accurately:

…(the) notion of the ‘common good’…she (Clinton) indisputably draws her vision from the same eternal instinct to impose order on society, to create an all-encompassing community, to get past endless squabbles and ensconce each individual in the security blanket of the state.  Hers is a political religion, an updated Social Gospel- light on the Gospel, heavy on the Social- spoken in soothing tones and conjuring a reassuring vision of cooperation and community…The village may have replaced ‘the state’,  and it in turn may have replaced the fist with the hug, but an unwanted embrace from which you cannot escape… (Goldberg, 357)

The idea of women embracing the left and socialism is not new to modern America, either. Throughout history we have many examples of such behavior from women. In John Derbyshire’s 2009 classic “We Are Doomed” (a must read), he explains:

The ‘gender gap’ in political attitudes has been remarked on since at least 391 B.C.  That was the year Aristophanes staged his play ‘The Assemblywomen’ (Ecclesiazusae).  In the play the women of Athens, disguised as men, take over the assembly and vote themselves into power.  Once in charge, they institute a program of pure socialism:

‘Everyone is to have an equal share in everything and live on that; we won’t have one man rich while another lives in penury, one man farming hundreds of acres while another hasn’t got enough land to get buried in…No one will be motivated by need: everybody will have everything…the children will regard all older men as fathers…’

The play wright grasped the essential point…  Women incline to socialism much more naturally than do men.” (Derbyshire, 88) 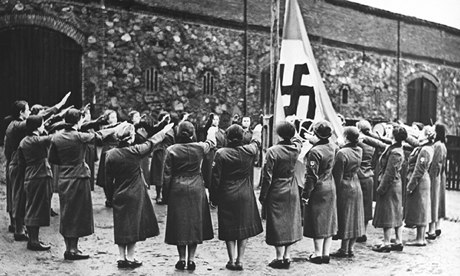 Women illustrating adherence to “the party”

George Orwell, whose insights into these matters were very deep, also noticed this (women’s inclination to Socialism)…Winston Smith, the protagonist of 1984, observe(s):

‘It was always the women, and above all the young ones, who were the most bigoted adherents of the Party, the swallowers of slogans, the amateur spies and nosers-out of orthodoxy… ‘

I (Derbyshire) saw the same thing myself when living in communist China in the years just after Mao.  If you wanted to hear a total-credulity, utterly unreflective parroting of the Party line, a woman was always your best bet.’ (Derbyshire, 88)

In America, when women were granted the right to vote, it opened a solid voting bloc for Left statists for years to come. Ironically, gyno-con Ann Coulter (a brilliant conservative woman; yes, they exist, but rare) states:

It would be a much better country if women did not vote. That is simply a fact.  In fact, in every presidential election since 1950 — except Goldwater in ’64 — the Republican would have won, if only the men had voted. – “An appalling magic” in The Guardian (17 May 2003)

Gentlemen, it all went to shit when we gave them the right to vote. We even hear it from a woman, Ann Coulter. Women became a huge and powerful voting bloc that rarely change its tune—the numbers show very little fluctuation in their leftist leaning, as explained earlier.

One can only imagine a country where statists, leftists, cuckservatives, and neocons might not have existed if women had not been granted the vote. Whatever the case, a large statist government is now a pressing issue, with much of it being the responsibility of idealistic, dumb, and dangerous policies supported by women and feminized SJW men.

To take this a step further, the world becomes more feminized each day and traditional sex roles get reversed—look no further than the new Star Wars and Mad Max to see the effects of this feminization. In modern culture, we have women being glamorized in roles of power and “strong, independent, women” that can do what men do. This propaganda easily translates to the ballot box.

Not on my watch!

The feminization of everything is a weak attempt to indoctrinate young men to believe that women are leaders and that women are masculine. In response, weak men are followers of their causes and beliefs. This is something men, young and old, should strive to be conscious of every day.

We, as men, must be aware of this political bloc illustrated in the Democratic party. As we can see in the chart previously discussed, men tend to fluctuate their vote based on the individual, women vote based along strict party adherence.  Women are one solidarity voting bloc for large government and Democratic party lines.

This is dangerous, because it is determining the fate of our country and our future. We are now on a path to destruction and drastic change must occur. The fate rests in the hands of men, not idealistic, statist, Leftist women, nor SJWs.

We must take back our country, if not by the voting box, then by any means necessary.

Read More: 8 Things That Make A Girl Stupid And Useless