Why Star Wars: The Force Awakens Is A Social Justice Propaganda Film

…you look around that room and you see the whitest fucking room in the history of time. It’s just unbelievably white. And I just thought, we’re casting this show and we have an opportunity to do anything we want, why not cast the show with actors of color?

— JJ Abrams revealing how he chose actors for the color of their skin, not for who he thought were the best actors or actresses. These preferences flowed into gender as well.

Spread my warning across the galaxy, Padawans.

The Force Awakens is spectacularly replete with the handiwork of the avowed Social Justice Warrior JJ Abrams. So where can I possibly start in my criticisms? From the casting, which puts minorities and women incessantly and ridiculously in your face to make a political point (not tell a story), to the laziest of all space battles, the problems with the Episode 7 are more than numerous.

Let’s make no mistake: Abrams is a capable filmmaker, when he wants to be. Parts with General Hux, especially his speech and the destruction of the Hosnian system, are glorious. The visuals, not just those with CGI, are stunning. Abrams’ mission, though, is to distract viewers with impressive scenes and some chunks of capably written dialogue so as to implant his take on “girl power” and safe spaces for non-whites.

The Mary Sue of all Mary Sues

Is there anything she can’t do after reading a third wave feminist tract?

The female Rey, who it is heavily implied is Luke’s daughter, is the most underdeveloped character yet in over 14 hours of Star Wars films. Her story arc is practically-speaking non-existent and only the veneer of her sadness about her family leaving her on Jakku is painted over it. Whereas with other major Force-wielders in the series their abilities have previously developed or are developed over years, Rey seemingly does it in less than 12 seconds, rather than parsecs. Her whole trajectory in the film reeks of “god mode”, which for non-gamers like myself refers to the cheat codes that make a game character invincible.

Big question: did she fart in the wind on Jakku and the blowback from the desert winds grew her Force powers to monolithic proportions? That’s the only possible explanation.

In the case of Anakin Skywalker in the prequels, by contrast, we learn that he is the only human pilot to engage in pod racing. His mechanical know-how has been honed over some years, culminating in his construction of both his own pad racer and the droid C-3PO. And when he destroys the droid control ship above Naboo, it is largely as a result of his good fortune, not just long-acquired skill. A decade later and with continuous training, he additionally fails to best Count Dooku on Geonosis. 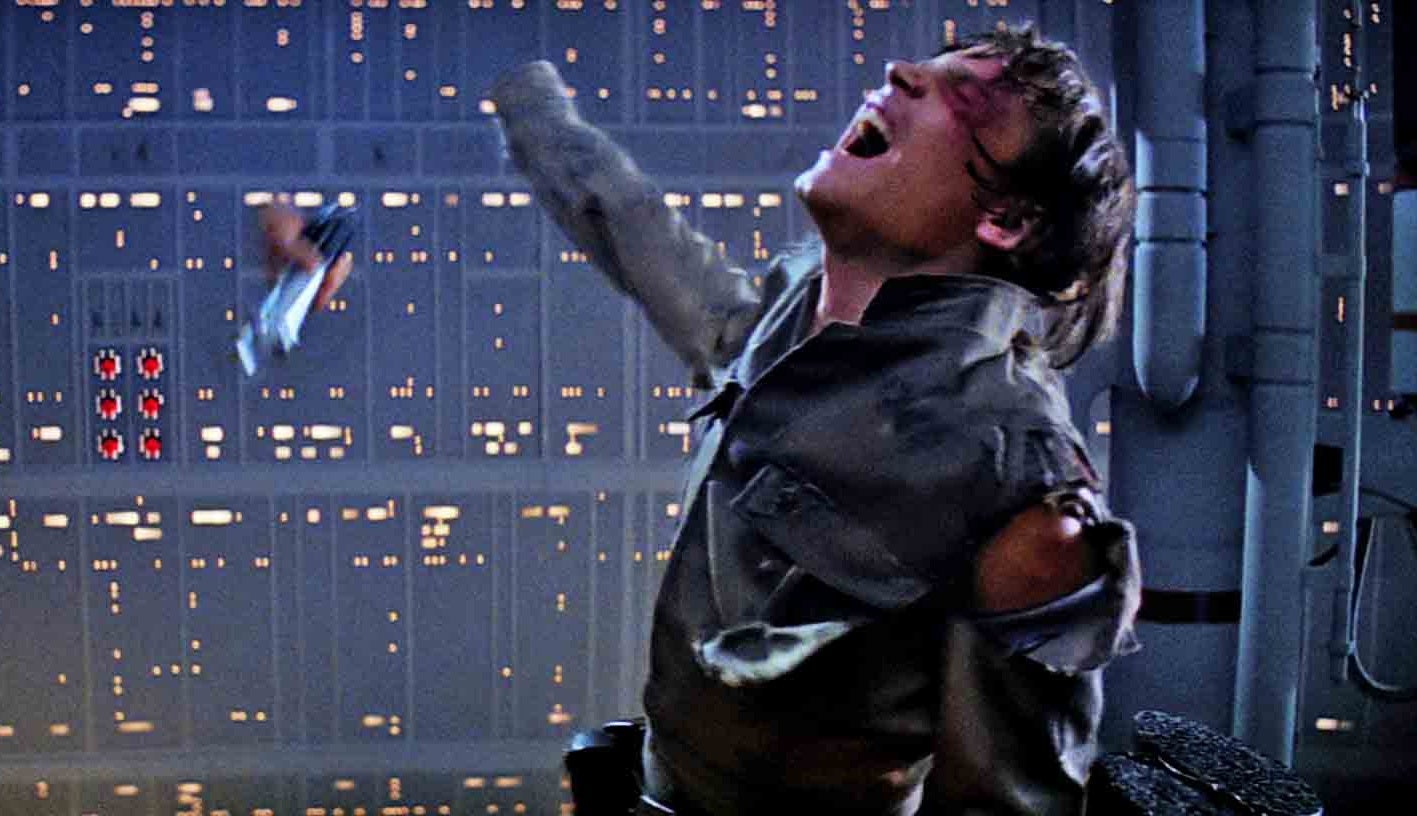 Two hours into the first film, with no training, Rey beats Kylo Ren. Four hours into the original trilogy, and with the training of Ben Kenobi and Yoda, Luke loses his right hand. Go girls!

Cast your mind back to the original trilogy, too. Aside from a little kid’s play with his father’s lightsaber at Ben Kenobi’s hermit pad and onboard the Millennium Falcon, Luke does not wield the weapon at all in A New Hope, let alone in combat against the likes of a Vader. He does destroy the Death Star as a very novice X-wing pilot, but this is after years of him taking out his stuck-on-bloody-Tatooine frustrations on womp rats in his T-16. Moreover, Luke would have been burnt space toast without the intervention of Han Solo and the Falcon. Oh, and in The Empire Strikes Back, after the tutelage of Yoda, he still gets his hand cleaved off by Vader.

So I am meant to believe that Rey could savage and nearly kill her presumed cousin Kylo Ren, whether he is injured or not? Ren is not yet a Vader in his powers. That much is clear. But this is the man who helped slaughter, as a boy or teenager, basically all of the talented pupils of Luke Skywalker. Luke then disappears and Kylo Ren is given more or less free rein, only to be wounded once by Chewbacca’s crossbow, once by apparently non-Force-sensitive Finn (“This is for slavery, whitey!”) and three times by Rey (“Fuck the patriarchy!”). Fuck off—that’s a plot fueled by meth.

To boot, Rey’s piloting and mechanical skills, to the point of knowing everything, is mind-boggingly “get more women in STEM” in its motivations. When she starts teaching Han Solo about the Falcon, things become breathtakingly contrived. It’s as if Abrams was paid by a female science scholarship foundation to drum up some public service announcements via film.

The plot is IQ-damagingly dumb They put twenty times more effort into the parade than organizing the base defenses. And they didn’t learn from either the first or second Death Star debacles. Or Abrams and his writing team were too busy making Rey a goddess.

I take no issue with some of the artistic license Abrams uses in The Force Awakens. How the First Order managed to create a sun-sucking super weapon on a preexisting ice planet can be explained one day by some talented PhD graduate from the University of Coruscant. So, too, can the appearance of the Starkiller’s death beams and the destruction of the Hosnian system in the sky above far removed Takodana.

What matters, though, is the plot. Scientific ambiguities and inaccuracies can be tolerated if the story functions. But it’s entirely lacking here. For a start, the film borrows from or plain copies so many elements of A New Hope that I lost count. A non-exhaustive list would include a girl being held captive at the flagship facility of a military junta, a space battle to prevent the noble guerrillas’ base from being obliterated, and the death of an older character just as the younger infiltrators are about to leave for home. For the sake of free words, I cannot mention them all.

Beyond just the formulaic plot, here are a few of the frankly stupid elements of the story:

Tick the boxes with plenty of female and non-white characters 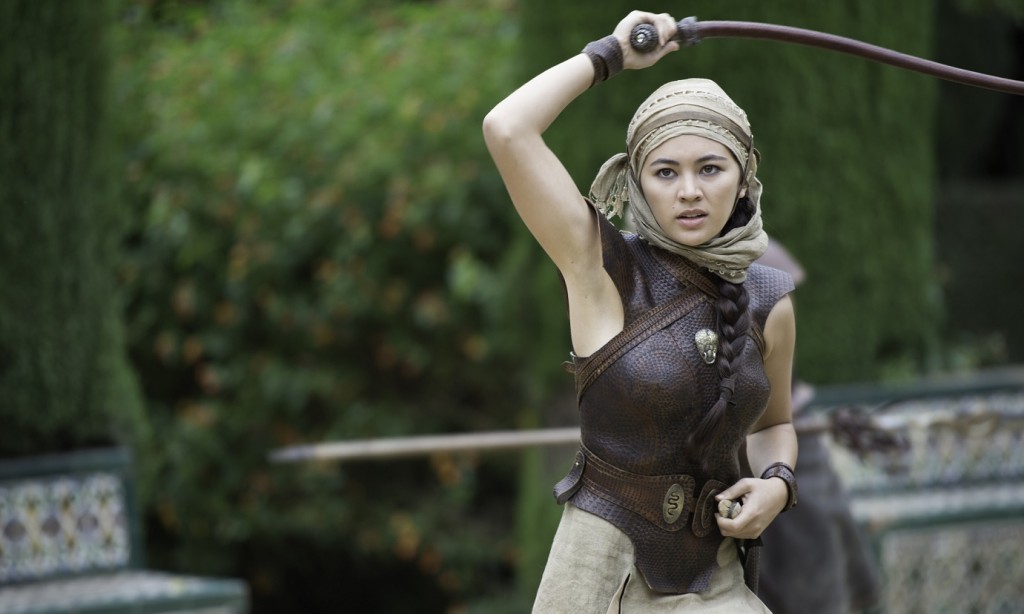 Game of Thrones’ Jessica Henwick was a cast a female X-wing pilot. Again, cast for her race and gender.

You can sniff out Abrams’ leanings from the start. As First Order troopships prepare to land to take out a village on Jakku, the first villager who pulls out a a blaster in defense is a woman. And it is some sort of big, mounted-looking one! This girl power is really paralleled in our world, where millions of young Western girls are so keen to protect their village or country that they won’t even join up, as their male contemporaries are forced to, in places like Finland and South Korea during peacetime. Or make the slightest squeak about the double standard. Well done, JJ.

Captain Phasma is given command of the First Order’s elite stormtroopers but she has the same biology as in our world, where no woman has ever passed the Marine Corps’ Infantry Officer Course. Another female stormtrooper reports to Ren about the failed attempt to locate Rey. And, after years of pretty much male-only recruitment, the New Republic’s affirmative action policies have been copied by the First Order, with large numbers of female military panel operators, technicians and officers.

The same goes for the racial choices. Insert a token female Asian and black male pilot. Black and Asian pilots were actually first done long ago (in Return of the Jedi) but JJ needs more, more, more! All while the plot suffers. Funny how an overwhelmingly male military combat force in a film is considered “unrealistic” when it is almost a carbon copy of our own reality in 2015.

Do not watch this film (at least by paying) 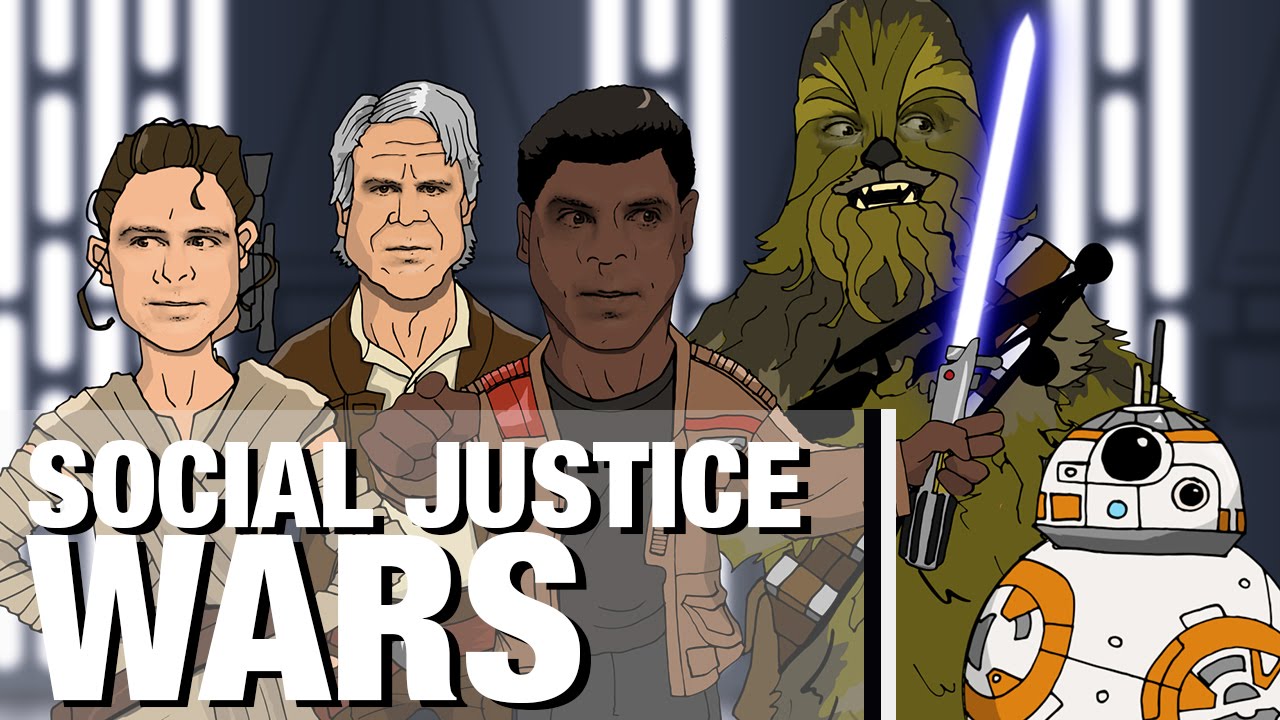 Pretty much sums it up.

Somebody has to watch it and for ROK that person is me. Our proprietor Roosh has refused to and all power to him and anyone else who has abstained. It helps when a limited few of us view it, to pick it apart piece by piece. An understanding of how entertainment is being used to propagandise acceptable social narratives is important.

It’s laughable how critics can butcher the revelation in the prequels that the Force is just the interaction of symbiotic organisms called midi-chlorians and other living things but laud The Force Awakens as a piece of sophisticated, “progressive” filmmaking. Some outlets have even resorted to naming and implicitly shaming critics who disliked this new addition. For a good parody of the pro-SJW obsessions of The Force Awakens, see Steven Crowder’s recent takedown.

For the time being, when it comes to deciding whether to see this film, take evasive action. It’s a trap.

Read More: Did The New Star Wars Casting Have A Racial Agenda?