In one of the bigger ironies of modern times, SJWs pursuing unsubstantiated rape allegations are resorting to the same tactics and lowest common denominator politics as Southerners and others who once took “justice” into their own hands against black criminal suspects. The only distinction really is that modern do-gooders on university campuses especially have not (yet) resorted to killing those accused but not convicted of rape. Well, at least in the West and there’s always a first for everything.

Of all the race-based lynchings recorded in American history, the 1930 deaths of Thomas Shipp and Abram Smith in Indiana are the most infamous. Shipp and Smith stood accused of involvement in a robbery, rape and murder incident. Townsfolk from the town of Marion removed the duo from the local jail, viciously beat them and then gruesomely strung them up for all to see. SJWs, along with plain regular people, have rightfully decried this appalling outcome many decades later. Most tellingly, neither of the men were ever convicted.

Yet fast forward 85 years and SJWs believe that one doesn’t need firm evidence and a proper, fair court process to “convict” someone of the crime of rape. The testimony of a white person in Marion would not have satisfied a finding of guilty against Shipp and Smith in the eyes of leftists (or anyone with any sense of due process) but nowadays a woman accusing a man of rape constitutes a finding of rape.

Seriously, what world are we living in? 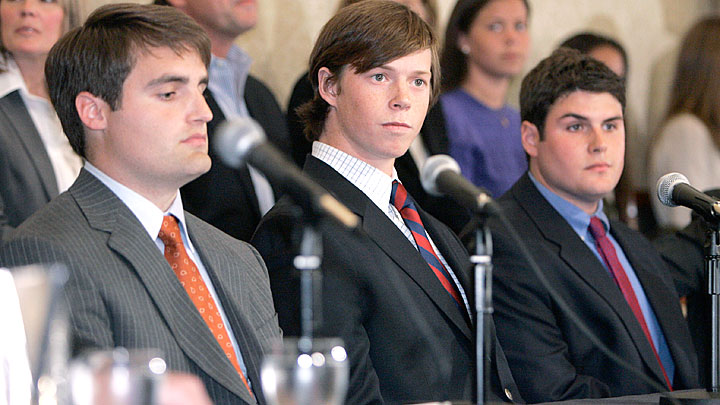 Just because the Duke lacrosse players weren’t lynched doesn’t make the mob that attacked them any less virulent in their hatred of due process.

Look what the lynch mob mentality, sans execution, has wrought upon fairness over the past decade alone. A lynch mob identical in its virulence to the pack in Marion sought to paint a group of Duke lacrosse players as rapists just because an unbalanced, drug-addicted black stripper said so. Unproven accusations of racism and sexism converged to produce a miscarriage of justice of truly shocking proportions. The fact that none of the innocent players died is somehow meant to mitigate the disemboweling of common sense and, to boot, the need for an impartial investigation.

But did those quick to judge learn from their loss of control? Of course not. Along came a carbon copy accusation at the University of Virginia, courtesy of the supremely sadistic Jackie Coakley. With the same opportunism of the mob leaders in Marion, “journalist” Sabrina Rubin Erdely strove to make a name for herself in the eyes of her peers and ideological drinking buddies. And all this was at the expense of even a half-hearted research process, let alone a responsible facts-based appraisal.

Due process is a buzzword that SJWs apply based on ideological grounds alone. Members of a UVA fraternity do not deserve it but Shipp and Smith did. Supposedly, because the former group were both white and male, there cannot be a question of unfairness in labeling them rapists based only on hearsay. Similarly untenable justifications for perpetrating the spirit of the Marion, Indiana conviction standards have appeared in other incidents ad nauseam.

As long as they don’t kill them, SJWs believe they can ruin non-convicted men’s lives as much as they want

Did SJWs have any more basis for calling Paul Nungesser a rapist than the mob at Marion had for calling Shipp and Smith rapists?

From the Duke lacrosse players to Paul Nungesser, reputations and livelihoods have been sullied for life because SJWs are beyond trigger-happy in branding men as guilty. In many cases, police have had no evidence to even detain these men, unlike the booked Shipp and Smith. Yet that doesn’t matter when, like a series of 1930s show trials, something resembling a quota system is initiated by zealous leftists. “Not enough convictions! More!” they bellow.

Usually, SJWs take the uncompromising approach of never admitting their mistakes. When both Emma Sulkowicz and Jackie Coakley were exposed as malicious frauds, for example, professional retrogrades like Jessica Valenti still clung to the idea that the men they accused of rape were still guilty. When such a position fails, Stalinist legal observers like Ezra Klein seize upon notions of utilitarianism, accepting that innocent men will be caught up in the net to ensure that the “rapists” are rooted out, typically through unapologetically woeful kangaroo courts.

They may not wear the everyman clothing and have the same genial rural manners of the Marion mob participants, but SJWs are just as committed to undermining social and legal civility.

Black Lives Matter. Civil rights. Feminism. Due process. Meet the new (and old) euphemisms used to selectively champion the pet projects of SJWs. And it’s only going to get worse. After stripping these concepts of their common sense meaning and then polluting them incessantly, the opponents of decency and fairness will always move onto bigger and badder aims.

It’s sad indictment on modern society that we even have to wonder if 1930 was a better time for due process than a dystopian 2015.