As Germany focuses its attention on accommodating at least 800,000 new Syrian arrivals, 75%+ of whom are not Syrian, cash-strapped Greek women are working as prostitutes for as little as two euro ($2.12). Having refused to help its fellow EU state anymore, Berlin has hypocritically sought to appease self-hating Germans, who relish the prospect of extinguishing traditional German ethnic identity, and already lavished billions in government funds on finding homes, jobs and social security for Middle Eastern migrants. These migrants are usually unwilling or unable to prove who they even are.

You might remember, just prior to the massive spike in hundreds of thousands of young, able-bodied Middle Eastern men seeking “asylum” in Germany, that Chancellor Angela Merkel’s government refused to give more money to Greece. The Greek people, especially its young adults, students, pensioners and disabled, had labored under the weight of onerous austerity measures for over half a decade. Yet Berlin was, aside from a few common sense extensions to Greece’s debt deadlines, unwilling to ever budge. So what sinister game is now being played with all the money being splurged on non-Europeans at the expense of poverty-stricken EU citizens? 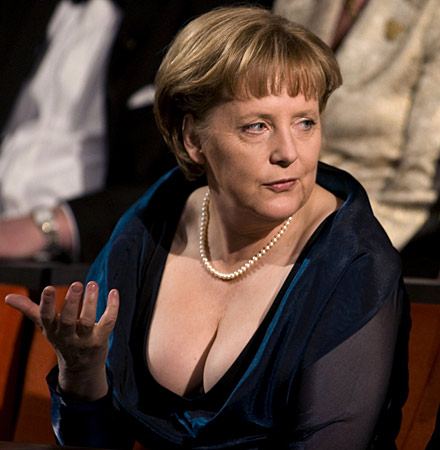 The only thing more in-your-face than Merkel’s cleavage is her newfound disdain for traditional German and European identity.

At the time, having strong ethnic links to Germany myself, I completely supported Merkel’s hardline attitude. After all, if Berlin was coming down strongly on the Greeks, this would surely flow to non-European immigration and similar maladies as well. Readers may call me naive for having had that perception, but I had good reason. Anyone familiar with native German media, not the BBC or CNN, would have sensed the groundswell that began in earnest five years ago. PEGIDA and other expressions of the average German’s fury at political correctness are merely the result of long-term debates within the country.

As early as 2010, Merkel herself was publicly criticizing Germany’s failed multiculturalism. Even the former Socialist federal minister Thilo Sarrazin and other nominal left-wingers joined establishment figures in castigating Germany’s essentially suicidal policies of immigration. Sarrazin’s book, Deutschland Schafft Sich Ab (“Germany Abolishes Itself”/”Germany Does Itself In”), was unsurprisingly the best-selling book of the decade. German-language reports in particular evinced what seemed to be a rapid change in German elites’ feelings towards foreigners arriving in Germany for thinly veiled economic reasons.

What Greeks? What Europeans? We see only Middle Easterners Ladies and gentlemen, I give you women and children refugees.

Meanwhile, Greek women selling sex are now trying to subsist based on the price of a sandwich. Of course, mainstream commentators will always put the spotlight on females suffering from Greece’s spectacular implosion, hence the prostitute angle emphasized by The Washington Post and other media outlets. However, we should not dismiss this narrower lens because it still speaks volumes about the skewed priorities of Berlin, Brussels and the SJWs clamoring for both these governments to accept another 10 million “refugees.”

If Greeks were not worthy of further monies from Berlin and other richer European governments (and I’m not saying this isn’t the case), 800,000+ Middle Easterners are certainly not deserving of the gargantuan assistance they are presently receiving. That is, of course, unless Merkel and others are seeking to spiritually expand the European Union’s borders well beyond Europe itself, in some sort of macabre nod to the very senile George Soros.

What about East Germany?

East Germany’s housing, unemployment and other economic crises are being deliberately ignored by Berlin, which is preferencing non-German illegal immigrants and “refugees”.

Forget Greece and its penniless new prostitutes for a moment. East Germany, which has only been reunited with West Germany for a quarter of a century, still lags behind the rest of the country. Nonetheless, this is the part of Germany where the biggest load of so-called Middle Eastern refugees have been officially resettled. That PEGIDA’s headquarters is in Dresden, a city in the Free State of Saxony in the east, is no mistake at all. East Germans have incessantly sought better living conditions, only to be slapped in the face by a central government more interested in providing for the needs of non-Germans.

Britain’s Financial Times is one of the reputable publications that has called out East Germany’s stagnant position. Its per capita output is only two thirds that of the average of western and southern German states, unemployment is nearly twice as high and the real economic gains it made from its low 1989 base leveled off a decade and a half ago. None of this matters, though, as Merkel and her CDU cronies have no solid electoral base in East Germany. And by dumping a greater proportion of new non-European arrivals there, they don’t risk alienating or losing their voter heartlands. Decrepit billionaire financier George Soros is not the only powerful person who wants to see a borderless Europe from the outside, not just within. This is a view increasingly shared by Angela Merkel and others, such as French President François Hollande, who will not face the demographic crisis boiling up for years within their respective countries. In conjuring up fantastical dreams of peaceful side-by-side co-existence between Europeans and anyone else from the rest of the world, they are throwing languishing people in East Germany, Greece and elsewhere out of their sights and into an economic abyss.

Japan is free to keep its population ethnically stable. So, too, is Korea. Arab countries are even permitted to prevent the entry of other Arabs. But not Europe or its offshoots in America, Australia, New Zealand and Canada. It is only we who are expected to sacrifice the well being of large segments of our own population so that millions of foreigners can live off our national largesse.

A sad result of this, among many, is Greek women whoring themselves out for spare change on a Monday or Tuesday night.

Read More: Why We Should Prioritize Christian Refugees From The Middle East