Even before Charlie Sheen admitted he had been infected with HIV, mostly anonymous women were already complaining about how he had supposedly exposed them to the risk of contracting the very serious disease. Evidently, according to some, he had not told many, most or perhaps all of them about his condition. Instead of taking the precautions that authorities encourage even for people with only normal sex lives, countless female conquests of Sheen in recent years chose, if we believe the stories circulating, to be penetrated by him without some form of effective protection.

Sheen’s ex-girlfriend Bree Olson has led the public charge against him. She asserted that they only used (very, very unsafe) lambskin condoms, which amounts to an admission that Olson is a complete moron (if she isn’t a liar and money-hungry semi-extortionist). Sheen himself publicly admitted he is HIV positive this week and said he only had unprotected sex with two women, both of whom knew his diagnosis. He also hit back at any accusation that he failed to tell any of his other sexual partners.

This is not a mitigation of Sheen’s alleged behavior, which would be selfish and reckless if true. Yet the world is full of such people. Just as a person doesn’t walk about Brooklyn, Harlem, South Central LA, or South Central Chicago with their wallet out and in their hands at 1am, you don’t have condom-less sex with a person many regard as a mentally unstable Hollywood womanizer, irrespective of whether he has told you he has HIV.

Contracting STDs, especially the most debilitating and dangerous ones, is not a matter of fairness. You can and will get them if you don’t minimize your risks, and not having been told by your sexual partner isn’t some grand form of immunity.

Are these (mostly anonymous) women money-hungry or as thick as bricks? 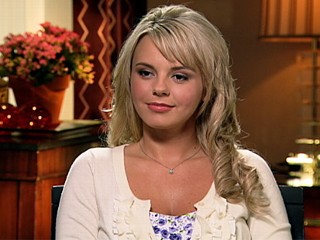 Bree Olson, a moron who had unprotected/half-unprotected sex with Charlie Sheen, or a calculated extortionist?

The tragic beauty of this choice is that either way we have another indication of negative female behavior in action. Sheen’s version of events shows the patterns of emotional or financial blackmail many women will engage in when an opportunity presents itself. In his Today Show interview with Matt Lauer, Sheen chronicled purported instances of extortion by those threatening to reveal his HIV status. He gave no indication that these were men and only women were mentioned.

If we take the claims of the women, including Olson, seriously, we’re working with an additional illustration of how women, teaching themselves to act as victims, are never even partially responsible for what position they find themselves in. They aren’t obliged to practice safe sex as the man has to tell them. They can walk the streets at any time of the night they want (while many safety-conscious men choose not to) and be suddenly surprised when they are attacked.

Responsibility is different from blame, however. A person who infects someone with HIV/AIDS (or risks it) without telling their partner is criminally to blame, whereas reckless unsafe sex with someone like Charlie Sheen, if it leads to them getting the same disease, is a matter of non-criminal personal responsibility. Just as me travelling to Afghanistan’s rural reaches as a tourist would be stupidity I am responsible for, a woman having unprotected sex is something she has to face up to when eventually STDs catch up with her.

I am not declaring all of you should suddenly stop having any unprotected sex. That’s your decision (and one you may have to account for later). I myself have had unprotected sex less than 10% of the time and with less than 10% of my partners, and most of that was with longer-term girlfriends or booty call girls (on birth control, I double and triple-checked).

But even the sweetest girl may have unknowingly contracted chlamydia or something else at another point in time. Perception is not reality, as I’m sure at least some of you will discover or have already discovered after a pregnancy or fateful visit to the doctor.

Unprotected sex is a form of gambling. You can play, but know the rules first. A pregnancy, if the girl doesn’t abort it, may very well result in a ridiculously draining hate-hate relationship between you and the state and girl for decades. An STD could signal the end of your sex life as you know it, plus create very real health consequences. And, like many games, this one can throw you many wildcards, most notably where the pristine girl you thought you were having sex with is actually a nuclear waste dump comprised of some nasty vaginal-dwelling contagions.

In terms of sympathy, you will get a lot less than girls like Bree Olson, and you won’t be able to capitalize on a classless lawsuit, or get away with semi- or full-blown extortion. You’re a man and responsibility, even for what she does, is your lot in life.

The vitiation of female responsibility is a sport in modern society

Said no feminist ever, at least genuinely.

Those familiar with my body of work here on ROK will know that I tend to mix and match my article topics, going from self-improvement one minute to doom and gloom the next. Alas, this is how life works nowadays. Positivity will get you nowhere unless it it utilized alongside consistent doses of reality.

Charlie Sheen’s story is a warning in so many ways—particularly the lack of female loyalty you can expect over time and the health and other pitfalls of having your own self-determined, alpha lifestyle. Amidst all of this, society will make excuse after excuse in legitimizing poor female behavior. Responsibility is not a word you will often hear when people seek to explain it.

Don’t despair, though. Just as a new convertible is fun to drive along a highway, we also need road signs to guide us to our destination. And preferably arrive there without a HIV or female-related crash.

Read More: A Brief Lesson In Game From Charlie Sheen