University of Missouri hunger striker Jonathan Butler, who refused food so the institution’s President Tim Wolfe would resign, is yet another curious case of SJW economic and social privilege gone mad. Aside from his totally unfounded accusation that Wolfe’s car “bumped”/”hit” him, Butler literally comes from the 0.1%. His father, Eric L. Butler, earned an astonishing $8.4 million last year as a Union Pacific executive vice president for sales and marketing and his family is worth an estimated $20 million. On the back of this background, Butler junior has spent nearly a decade in higher education while poorer students, white, black and everything in between, have had to make their way in the real world.

Although Jonathan Butler was unable to hide his background (and how could he?), he has used his blackness to continue the narrative of the poor, oppressed African-American. “White privilege” and its corollaries have once again been stripped of any and all context, nuance, and reality. During his eight-day, attention-seeking hunger strike, this professional student probably gave no thought to the fact that his higher education dreams have been easier to fulfill than 99.5% of the white student body at his very own campus. He was only focused on ending so-called institutional racism at Mizzou, an accusation about as proven as the UVA rape hoax.

Why do very wealthy SJWs behave this way? To come to a conclusion, let’s look back at another sad episode in SJW history. This year, ROK proprietor Roosh was assaulted in the street by one very spoiled Montreal native named Jessica Lelièvre. Her cowardly attack on Roosh, knowing full well he would not and could not retaliate against a woman, represented the culmination of years of constant self-victimization via her participation in Concordia University “politics.” Almost every major campaign she has involved herself in has explicitly or implicitly emphasized purported male privilege, despite her hailing from a phenomenally wealthy family whose prosperity started, ironically, with her very old and very white great-grandfather Émile, a construction magnate.

Establishing your own corporation is usually very hard work. Even with the good fortune of being born to very wealthy parents, a descendant of that corporation’s founder, like Lelièvre’s father, who now runs the family business, doesn’t have the easiest job in the world managing such a sprawling business concern. Consciously or unconsciously, children of privilege like Jessica Lelièvre and Jonathan Butler (a son of a business executive but still analogous) see this and realize that they can make a name for themselves in faster ways while they’re much younger. Erupting in rage spirals about some manufactured crisis enables them to avoid the perceived drudgery of sustained work along a conventional career path.

Lying about being struck by a white man’s car 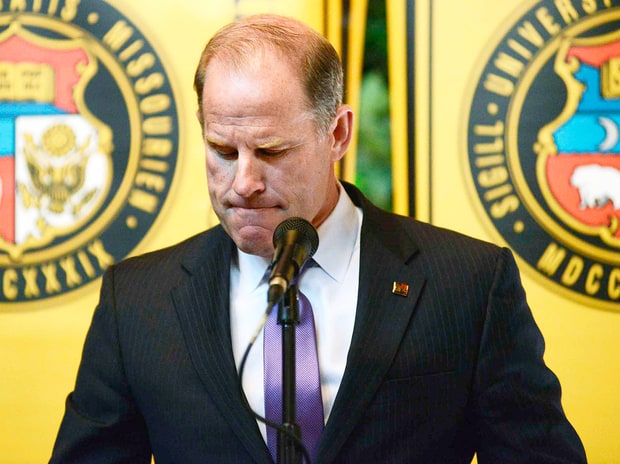 One of Tim Wolfe’s crimes was not getting out of his car so people like Jonathan Butler could beat him up for supporting imagined racism on campus.

It is not unusual for college and other SJWs, fixated on their microaggressions and triggers, to out themselves as liars either through video proof or similarly incontrovertible evidence. Not to be outdone by his ideological colleagues across American campuses, Jonathan Butler jumped (Or ran? Or gracefully gazelled?) his way into President Tim Wolfe’s car in order to claim he was hit by a racist white man. The video and some interesting commentary can be found here. Let’s hope his multimillionaire father’s pittance of an insurance policy covered the massive hurt to Jonathan’s ego.

What’s more is that Butler and his colleagues committed the crime of false imprisonment, aggressively surrounding Wolfe’s car so he could not move his car more than a few meters at a time. All this was left by the wayside in the media’s reporting, which gave no balance amidst the extreme acts of provocation and intimidation perpetrated by self-proclaimed civil rights activists. As a trinket to proper coverage, some mainstream outlets documented the Melissa Click threat against a journalist but still maintained their implicit or explicit support of the Mizzou bullies overall.

Are their parents millionaires? In the case of the United Kingdom especially, do they have connections in the nobility or high society? Did they get into university because of legacy or affirmative action, like Michelle Obama’s admission to Princeton due to her brother’s attendance and her race? And just because a SJW doesn’t have gargantuan privilege, their views are not suddenly valid. The privilege many of them have is simply another layer of icing on the cake to be exploited in undermining their pernicious campaigns.

Once again, SJW ideologies go hand-in-hand with self-delusion and mental illness. The narcissism exhibited by people like Jonathan Butler sows the seeds of their own heavy fall. Buttressed by his family’s largess, he will undoubtedly continue his trajectory of seeking the public spotlight. But amongst a growing body of Americans, his credibility will be forever tarnished.

That said, there are plenty more Jonathan Butlers yet to get their comeuppance.