An “aspiring comedienne,” Farah Brook, recently filmed herself trying to forcibly kiss multiple men (and a sole woman) in New York City. The reason? She wanted a film role. Even more attempts to kiss were actually made, ones which didn’t make the final cut, including a “f— off” from a clearly annoyed target.

Social and mainstream media responses were mixed, but a large number, including Time and the UK’s Mirror, found the “stunt” highly entertaining. What these outlets did not reveal, however, is that many men have been arrested, convicted, and even jailed for either attempted or completed forced kissing.

The subject in question

Brook is a compulsive, retrograde attention-seeker, having filmed herself propositioning and attempting to forced-kiss multiple people without even the possibility for misconstruing consent. If her name were Frank Brook and “he” had tried to kiss just one woman, an arrest, booking, fingerprinting, DNA sample-taking and conviction by a court for indecency or sexual assault would have followed, potentially involving jail time. But given this “experiment” centered on multiple people being accosted, the implications for a man would have been much worse.

Supporters or minimizers of Brook’s behavior will point out that no film exists of her actually kissing someone against their will. Firstly, we have no idea that this didn’t happen. Brook’s poor rationalizations for her harassing actions (see below) indicates that her retelling of the non-included footage should be regarded with extreme caution.

Secondly, just because people are able to avoid her lips in the video doesn’t mitigate that what has happened is a thorough attempt at sexual assault and substantiated sexual harassment. In fact, sexual assault, like its physical cousin, need not involve physical contact, as the examples of arrested men prove.

And finally, considering that feminists now regard cat-calling and merely looking at the female form as sexual harassment (or sexual “violence” even!), how do we view someone actively trying to kiss, without warning, multiple people she’s asked directions from? This man had to physically push Brook away by the forehead to prevent her kissing him.

You already know that in practice this means when men who do it, not women.

The Campus Sexual Assault (CSA) Study (2007): Forced kissing and attempted forced kissing, along with many verbal comments, are included as sexual assault.

Rochester Institute of Technology (RIT): “In most states the following are considered acts of sexual assault… [f]orced kissing”

I could go on and on. You get the picture. Brook is behaving in ways that would get young men banned from college on a de facto permanent basis, staining their long-term earning potential and social relations in perpetuity. But she gets off because she’s a woman and, to boot, a woman trying to get ahead in the supposedly rampantly sexist world of “comedy.”

Brook’s justifications are equally preposterous. “I wanted to do something positive that involved love,” she cooed to The New York Daily News. Picture the incredulous faces if a man made that claim appearing before a college tribunal or outside one after a mistaken kiss or attempted kiss with a fellow female student, let alone with a dozen or so classmates.

The 10 hours in New York hypocrisy 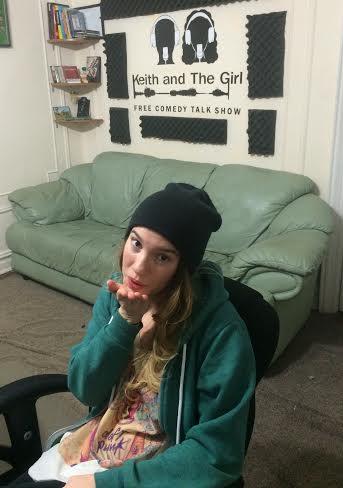 “Men got arrested for the things I did? But I’m just a girl! Hi hi hi hi!”

Remember Shoshanna Roberts, the struggling actress who wanted to spruik herself under the guise of raising so-called “sexual harassment” awareness? When her video was released, feminists and other SJWs frothed at the mouth in order to pillory men, especially lower socio-economic, “ghetto-looking” African-Americans.

There has been no similar reaction to Farah Brook, who physically tried to sexually assault men. She wasn’t making comments or just looking, like the majority of men in Roberts’ contrived video. The silence given this distinction is deafening.

Brook has done the world a huge favor, though, despite her displayed sexual harassment (and assaults), because she filmed the double standard and laid it bare for all of us to see.

Men have been arrested or convicted for TRYING to kiss women

Mohammad Rasooly was convicted in March of sexual assault in southern England for trying to kiss a girl. The court placed him on the sex offenders’ registry for five years. He additionally lost his job, was sentenced to fifty hours of unpaid community work, and is being subjected to a year-long community order, including six months of correctional supervision.

Across the Atlantic, Carlos Chuva was arrested this year in Brook’s very own New York City for allegedly caressing the face and thigh of a woman, and trying to kiss her. The charge is first-degree felony sexual assault. Physical contact was purportedly made here, but the attempts to kiss were obviously part of the quantum of the claimed sexual assault.

It extends to sexual assault now, too.

Also in March, an Italian in Japan was arrested for trying to kiss a local Japanese woman on her forehead.

Back in Britain again, a man was detained this year on suspicion of trying to kiss a 16-year-old girl in his vehicle after offering her a lift. Whatever your opinion on grown men picking up 16-year-olds in cars is, the issue here was not to do with her age.

The question remains: why was Brook spared such an arrest? With the exception of the allegations against Chuva, all evidence suggests that Brook’s behavior was more rampant, premeditated, and excessive than any of the other three descriptions. Most importantly, it was caught right on camera and disseminated by Brook herself for the purposes of “entertainment.”

There’s a big difference between an attempted kiss on a dance floor with a girl you’ve flirted with, and going up to a complete stranger and trying to kiss her. Brook’s saving grace, having taken up the latter variety of sexual harassment, is her vagina. She should have been, like so many other men, arrested, charged and convicted for public indecency and sexual assault.

If Brook ever speaks out on gender issues, or copies the fraudulent assertion à la Sarah Silverman that women in comedy are discriminated against, we can remind her of the sexism that saved her from a criminal conviction and becoming a social pariah. That criminal conviction is the fate always reserved for anyone possessing a penis in a similar situation.