Arminius Hermann, elsewhere known by the nom-de-cyber Elusive Wapiti, is a father to four and husband to one. His interests outside of having too many opinions are hunting, motorcycling, and flying. 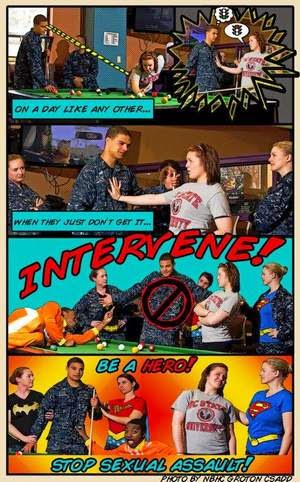 Yes, this is a Navy poster in an article about Air Force SAPR

It’s that time of the year again, in which Airmen are required to submit to anti-sexual assault training, with sexual assault prevention being a top Air Force service priority, on par with combat readiness.  Last year’s counter-sexual-assault effort in the Air Force was covered by Dr. Φ at his blog Delenda Est Cathargo.

Today’s article presents the standardized training materials passed down from the Air Force SAPR office what was executed at the field level this month and will be again later this summer, two of which are mandatory, two of which are optional.

First up is one of the mandatory training handouts, entitled “Flip the Script – How to Talk to a Survivor.”  The handout is unremarkable, but I include Page 1 and Page 2 for readers should they desire.

Next we find the other mandatory training handout, entitled “Flip the Script – Male Victimization.” Highlighted text is mine: 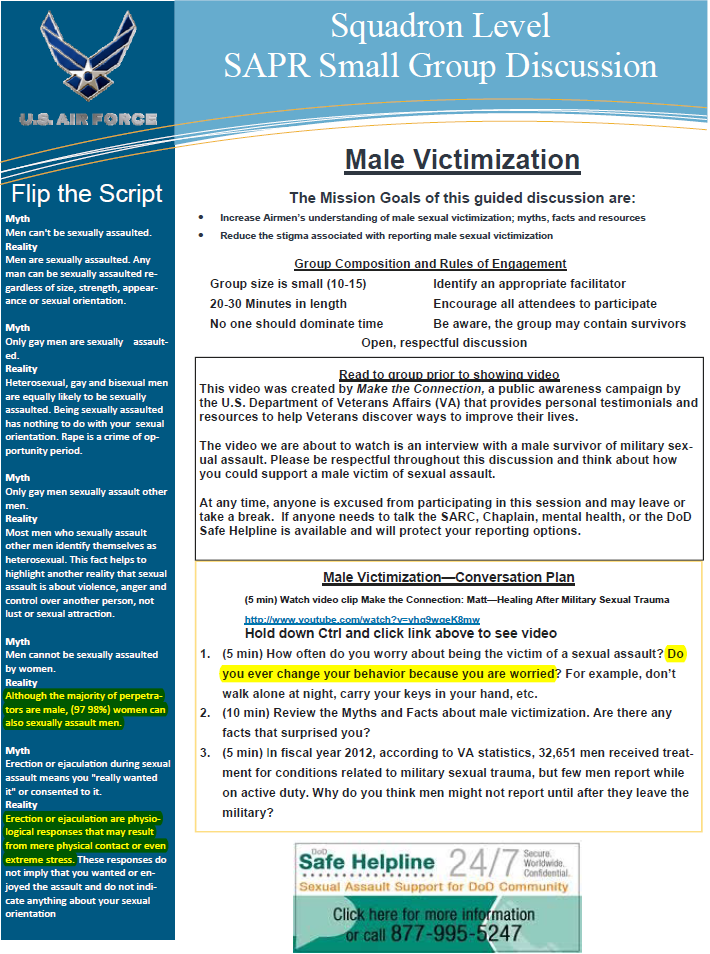 On the blue vertical bar on the left of the first linked “Flip the Script” page, we see listed as a “myth” that men cannot be sexually assaulted by women, followed by the “fact” that women make up only 2-3% of offenders.

This is absolutely correct—men can be sexually assaulted by women, and I credit the AF SAPR office for allowing this truth to surface. However, the “fact” that follows this truth is misleading, and flies in the face of recent scholarship and media reports  that suggest near parity in the use of coercive sexual tactics by men and women. 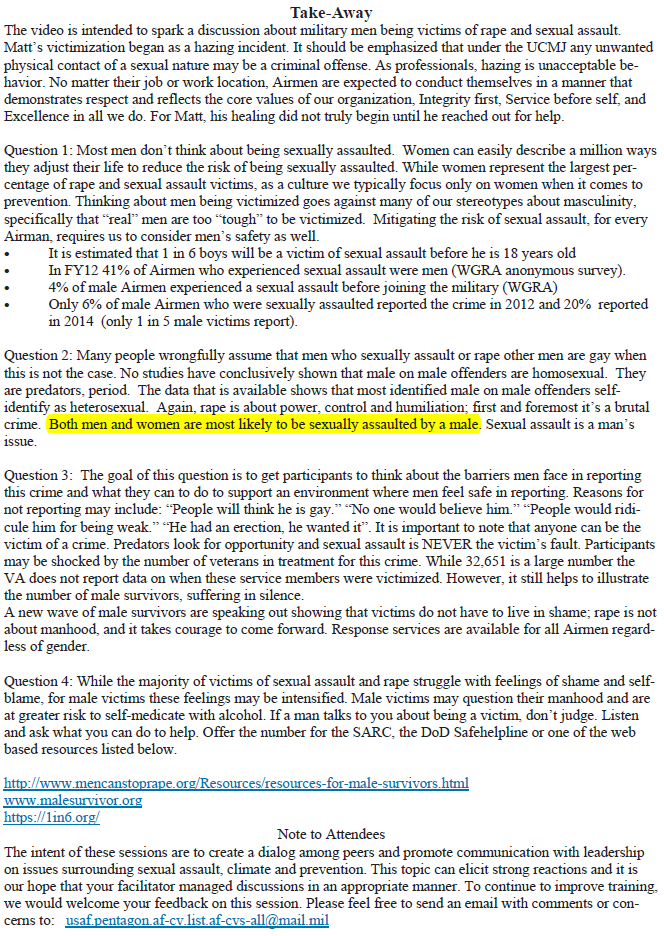 Doubtless some in the manosphere will stridently disagree with the proposition that men can be victims, or worse, adopt a victim mentality. To these brothers, I hear you and I understand you. But weaponized female sexual aggression is today’s reality, and one must acknowledge reality if (a) we men to deal with it, and (b) neutralize the threat.

This brings me to the first of the optional handouts, “Masculinities.”  One suspects that any discussion of masculinity derived from equalitarian or feminist scholarship is going to take on a certain tone, and this handout does not disappoint: 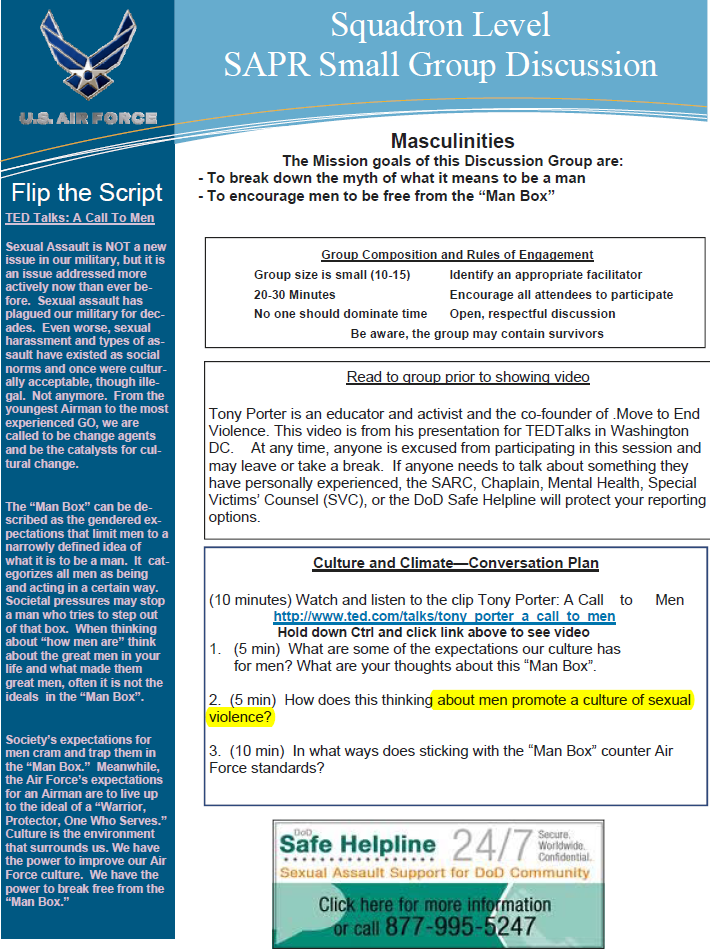 Attacking the masculinity and masculine identity of the 99% of those who do not offend, in order to more effectively ostracize the less than 1% who do, only serves to alienate those whose buy-in upon which this campaign depends.

Furthermore, I am dubious that undermining those masculine qualities that overlap with the martial virtues (e.g., control of emotions, control of fear, contempt for weakness, aggression, dominance, toughness, strength, courage, decisiveness, etc.) is the path for us as a society, even more so for an institution whose entire purpose is to kill people, break things, and endure the trials and horrors of war. 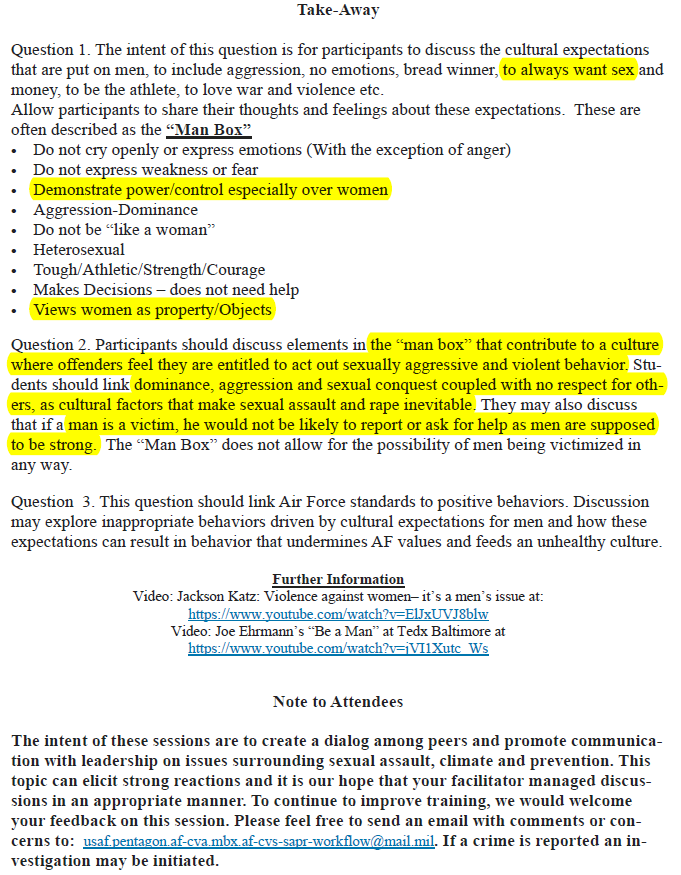 Notably missing from this discussion is how femininity itself may contribute to the problem. Could traits common to the female gender role, such as less personal accountability, a lack of sexual self-restraint, abuse of alcohol, unwillingness to act “like a man,” etc, all contribute to the incidence of military sexual assaults?

This brings me to the last handout [page 1, page 2], which addresses the so-called “rape culture” in the military. I won’t get into debunking rape culture itself, as minds greater than mine have beat me to it (notably, even RAINN has done so as well). I will however, discuss the culture that does exist in the military, mirroring that of high schools and colleges in the society at large, and here it is:

The military harbors within it a substantial high-risk sex subculture.

Society collectively–and the military is in this bucket too–can’t tell anyone, especially women, this simple fact of life: Banging someone who is not your spouse is risky. Doubly so when primed and lubricated by alcohol. If you don’t believe me, read the Air Force’s own roll-up of sexual assault convictions, and count for yourself the overwhelming proportion that are sport sex or alcohol involved.

Perhaps it is time for leaders of male Airmen, officers and non-commissioned officers both, to administer “the talk” to young military men and help them steer them clear of this and other risks associated with a coed military.

As I wrote in my last column at The Spearhead, reference the present legal and social climate for servicemen:

The default position is to believe the accuser victim.  This cannon is pointed at you, not-so-fortunate son.  Innocence is no longer presumed.  But fear not, there are many steps you may take to minimize your risk and protect yourself, and it’s not “blaming the victim” to pass them along to you:

1) Limit interactions, be they over the phone, via email, and especially face-to-face, with women to official business only. If you must interact with them, do so in a public area with witnesses.  Avoid situations where you may be alone behind closed doors with a military woman without a wingman as witness.

2) Speaking of wingman, have one whenever going out or when you may be faced by mixed-sex situations.

4) Avoid mixed-sex situations and alcohol. The vast, vast majority of military sexual assault cases involve alcohol.  When the booze comes out, and there are females about, that’s your cue to leave.  Male-only company is your friend.

5) Be upright in your behavior. The vast, vast majority of military sexual assault cases involve extra-marital sex in addition to alcohol.  This means don’t be a player. The fact of the matter is that one’s risk of being hit with a sexual assault allegation is a lot lower if you keep your fly zipped.

6) Record your encounters.  It may initially seem Rob Lowe-level creepy, but it has saved at least one man, and likely untold more, from being convicted of rape on the basis of a malicious FRA.  Video is best.

These steps may be small, but will do much to mitigate your risk of being caught on the wrong side of an accusation of sexual misconduct.  Remember that the system is looking to isolate and prosecute “offenders”, that women who bring sexual assault allegations are to be believed, false accusations will not be prosecuted or punished, and that you will be counting on the justice system to protect your assumed-innocent status. The process is part of the punishment, whether or not a conviction is made.

This isn’t the first time Airmen and other servicemen have been subjected to equalitarian swamp-fever re-education of the SAPR vein, and it won’t likely be the last.