Freedom Of Speech Is Dying In Sweden

A rather anonymous Finn proud of his roots and ashamed of the current state of his Fatherland.

Imagine driving one day in your beloved car and suddenly hitting a massive pothole. Distraught over the damage done to your car, you decide to complain to the local government about the condition of the road. Instead of acknowledging the complaint, cars with sirens on top arrive to take you away. You find yourself in a court that quickly sentences you to prison. This is a Kafkaesque nightmare far removed from reality, right?

Wrong. Just as George Orwell wrote that some animals are more equal than others, some groups are now more protected than others under new legislation that limits the freedom of speech in Sweden, which may prove to have a more Draconian effect on the already tightly controlled Swedish society.

The silencing of opposing views via legal norms is nowhere more obvious than in Sweden, where several laws have been passed to make it incredibly difficult, if not impossible, to legally argue against “special groups” within the society. A law passed in 2002 (2002:800) notably mentions that “expressing disrespect against groups of people with reference to race, color, national origin, ethnicity, confession of faith or sexual origin” can be sentenced to prison for a time of up to four years for inciting hatred.

The word “disrespect”(“missaktning”) is especially problematic, as the term fairly ambiguous. The law was most notably used to sentence a pastor (Åke Green) for comments against homosexuality during a sermon. The Supreme Court later overturned the conviction, as it did not comply with the European Convention of Human Rights, and hence the conviction would have most likely not have been upheld in the European Court. 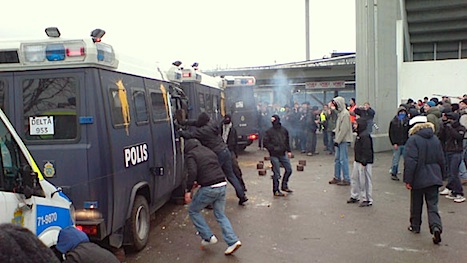 But who will protect the Swedes from the special groups?

However, the conviction by the Swedish legal system shows a troubling trend. Swedish laws restricting the freedom of speech have become increasingly severe, to the extent that they deviate from the European Convention of Human Rights. Furthermore, a new addition has recently been drafted to make prosecution for the crime of “insult” easier when LGBT, government officials, and immigrant groups are in question. One of the critical changes is that no longer will “exceptional circumstances” be required for public prosecution if the aforementioned groups are in question.

The new law, which will take effect from the 1st of January 2015, is designed to target hatred on the Internet (“näthatare”) especially. One of the key figures behind the law, Andreas Norlén described it as the sheriff returning to a previously lawless country.

It is still too early to see how the law will affect discussions on the Internet in Sweden; however, one could imagine it will make criticizing the protected groups very difficult, as the plaintiff has nothing to lose by hurling accusations, as the case will fall under public prosecution. Previously, if special circumstances were not present, public prosecution would not be available for the plaintiff. Furthermore, the plaintiff may have been ordered to pay the legal expenses of the defendant as well. By removing the threat of having to pay for baseless accusations, the new legislation is opening the door for a Draconian new standard of discussion on the Internet.

The tolerance of the Swedish society has become increasingly tested during recent years. For example, the chairman of the Swedish Democrats (SD) Jonas Andersson was assaulted due to his political affiliations with the anti-immigration party. Moreover, as 13% of Swedes voted for the SD in the last parliamentary election, it would appear that there is an increase in the desire for change within the Swedish society that is dividing the nation.

The reasons for the surge in demand for a change in immigration policy are easily traced to the growing problems of immigrants not integrating to Swedish society. The riots in Stockholm in 2013 by groups of mostly young immigrants are one example of the many issues immigration has brought to Sweden. The problems with immigrant-rich areas have become so widespread that the worldwide logistics company DB Schenker has stopped operating in Rinkeby, which is an area of Stockholm that is populated almost exclusively by immigrants. In 2012 Sweden received over 100,000 new immigrants, and as more and more immigrants continue to flood into Sweden the existing problems will no doubt become increasingly visible. Therefore, it is only a matter of time until no amount of new laws will deter Swedes from finally facing up to the fact that their society is in grave peril.

As Swedish cities burn, it is only a matter time until the flame ignites the hearts of the Swedish people. After that point, no amount of legislation will put out the fire.

Read More: The Curious Case Of The Feminist Party In Sweden