The Peak Of Democracy And The Death Of Feminism

Alexis de Toqueville was the first political philosopher to correctly note the rise of democratic power. After traveling through the United States in the 1830’s, he claimed that the age of democracy, so perfectly encapsulated in his masterwork Democracy in America, was coming into being.

America, then, exhibits in her social state a most extraordinary phenomenon. Men are there seen on a greater equality in point of fortune and intellect, or, in other words, more equal in their strength, than in any other country of the world, or in any age of which history has preserved the remembrance. (Source)

The principle quality of a democracy is equality. It shapes every facet of democratic life—mass elections, public debates, free-markets, welfare systems, and universal education. Name an institution of the modern world today, and it isn’t difficult to see how equality plays a central assumption in its foundation. Indeed equality would become so important in the coming times that Tocqueville claimed no ruler would be able to operate without invoking its authority:

On the other hand, I am persuaded that all who shall attempt, in the ages upon which we are entering, to base freedom upon aristocratic privilege, will fail-that all who shall attempt to draw and to retain authority within a single class, will fail. At the present day no ruler is skilful or strong enough to found a despotism, by re-establishing permanent distinctions of rank amongst his subjects: no legislator is wise or powerful enough to preserve free institutions, if he does not take equality for his first principle and his watchword. (Source)

Equality, it just so happens, is also the central assumption in the feminist movement. If feminists were to argue that people are unequal, men would retort that men are superior (many women would too). Equality is the premise that allows women to con men into believing they are all fighting for the same cause.

But before we examine feminism in greater detail, consider the following graph from Freedom House, a think tank that measures political freedoms across all countries: 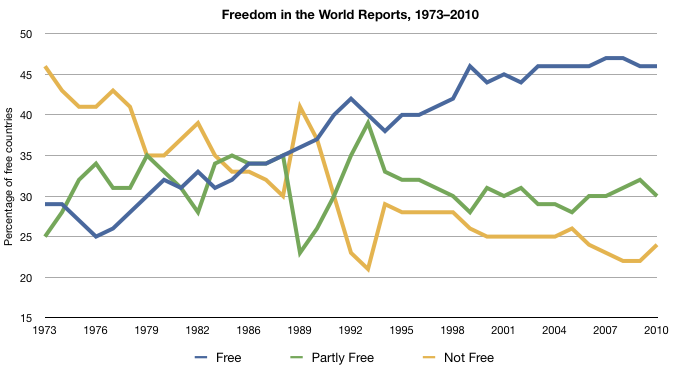 Democracies have increased steadily throughout the latter half of the century, continuing a trend that started at least one-hundred years prior, with a marked rise in popularity after the collapse of the USSR. But looking closer at the numbers for “free” societies in the 2000’s, we can see that there has been a steady decline in their freedom scores since the Twin Towers fell:

Technically, they classify more countries as free, but the quality of that freedom has been in decline. I believe this is the beginning of a long-term trend.

Our age of democracy has reached the peak of its growth. If we consider the history of democracy and the spread of equality since the American Revolution, there hasn’t been a major victory for democracy since the fall of the Berlin Wall. Democracies peaked at the turn of the century, but since 9/11 democratic nations have begun to die, both financially and demographically, whereas emerging economies and populations are coming from nations hostile to democracy and equality.

Thus democracies will shrink in power and scope as this century progresses. It will be discredited, much like communism was, and people will seek answers outside of democratic/representative governments.  We are already seeing the transformation of democratic governments today as increasingly authoritarian controls are placed to solve intractable problems (i.e. TSA body scanners, printing trillions of dollars, never ending war, bailouts, “income based repayment” for student loans, etc).

The decline of democracy is significant for men because it also means the decline of feminism. As today’s democracies are eventually replaced with oligarchic or monarchistic forms of governance, feminists are going to have a difficult time finding an audience with their message of equality.

When thinking of feminism in historical terms, we can consider feminism as any political movement designed to regulate male behavior in favor of female opportunity. One prominent historical example was Sparta, a state which gave undue license and freedoms to its women, while treating its men like cattle.

But other than short-term historical anomalies like Sparta, there has been no other political movement more favorable for female advancement than modern democracy. At no other time in human history have women held more power than a system where equality is true. And so the rise and fall of feminism will coincide with the rise and fall of democratic governments; so utterly dependent on equality that feminism will cease to exist anywhere near its current power without it. Instead some men and women will seize and maintain vastly more political power than others, and the common citizen will unquestioningly accept the dictates from his/her new masters.

Whether this is a good thing or a bad thing I cannot say, but it is clear that women will cease to exist as a significant political power when there is no more democratic government to serve them; instead both women and men will be regarded as property of the state to be used and managed as seen necessary by those in power. These trends may happen quickly or slowly, but make no mistake about where the world’s political climate is heading; the age of democracy, and feminism, is coming to an end.

Read Next: Why Feminism Will Die