Why Did Rose McGowan Attack Harvey Weinstein For Sexual Harassment But Defend A Pedophile Director?

Yeah, I still don’t really understand the whole story or history there, and I’d rather not, because it’s not really my business. But he’s an incredibly sweet and gentle man, lovely to his crew, and a very hard worker.

With some people already alleging that Hollywood is hiding a major pedophile ring, Rose McGowan’s double standards about sexual abuse and rape have been uncovered. Even just bad game by an adult male towards an adult female is career-ending, whereas pedophilia is “not really my business.” The mentally unstable McGowan not only chose to work with but actively defended one Victor Salva. She was directed by Salva in Rosewood Lane, knowing full well that he had been in prison for child rape and pornography.

The release of Rosewood Lane came 14 years after the supposedly “brave” ex-Charmed actress took a $100,000 settlement from Harvey Weinstein over allegations of sexual misconduct (and now rape). When reminded in an interview about the film that “Salva is a convicted and registered sex offender,” McGowan called him “incredibly sweet and gentle.”

This hypocrisy has not stopped the post-wall leader of “Rose’s Army” from trying to renew her celebrity profile in a way that her subpar acting skills could not. She is throwing all her energy into resurrecting herself as a feminist icon. The attention she is being lauded with contrasts badly with the celebrity world’s relative neglect of former child actors Corey Feldman and Elijah Wood, who have both directly alleged sexual misconduct, even rape, towards children working in Hollywood.

So much for these people taking a stand against sexual harassment and abuse! Men like Matt Damon and Russell Crowe are being taken to task for undocumented accusations that they protected Harvey Weinstein’s reputation, but a verified defense of a pedophile has been brushed aside as irrelevant.

Is spitting bad game in Hollywood now worse than pedophilia? In some ways, the answer to this question is a clear “yes.” An example from this year demonstrates this sad reality. Despite his Academy Award win, actor Casey Affleck, accused (not convicted!) of “sexual harassment,” has rarely been defended publicly, all while a child rapist like Roman Polanski is never seriously challenged by A-listers. At worst, Affleck has probably engaged in bad game, yet that will not stop him from being shunned by many more people in the coming years. Polanski, on the other hand, will be widely feted by the Hollywood elite when he dies soon.

The pederast director Victor Salva may not have been as powerful as Harvey Weinstein in 2011 when Rosewood Lane was released, but the bare murmors accompanying his time so far in Tinseltown is a testament to how unimportant the presence of pedophiles is in acting circles. Production companies are unlikely to be hounded by professional feminists and actresses (who are often the same people) for collaborating with someone like Salva. Moreover, an actress cannot get a six-figure payout from a wealthy producer for an allegation of pedophilia, unless she acted in films or television as a child. As a result, far less of an uproar results from people working with a Salva or Roman Polanski.

Tragically, it gets worse. Though they later deleted the articles, editors at Salon, which is a continual ally of liberal Hollywood, gladly published pieces trying to “humanize” pedophilia and its twisted practitioners, including the psychologically repulsive Todd Nickerson. In comparison, Return Of Kings has never observed Fox News or The National Review, two conservative outlets incessantly attacked by leftwing film stars, promoting pedophilia. 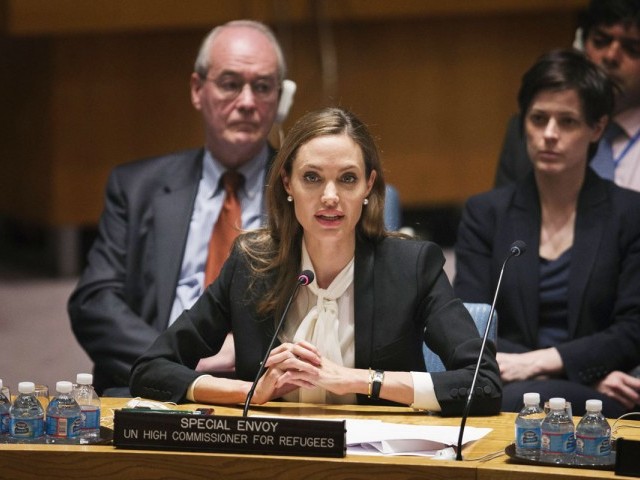 I dare say that Angelina Jolie wouldn’t be doing this if it didn’t help her career and fame.

As ROK proprietor Roosh commented to me about Rose McGowan recently, “Her attacks [on Weinstein and others] are meant to further her interests, nothing more.” More generally, it always makes sense to trace how a celebrity’s chosen advocacy, most notably feminism, might give them a future cash cow against a demonized man or, in the case of an aging woman like Rose McGowan, find a new career or profile after a major post-wall decline.

At the same time, very worthy causes, such as stopping the actual sexual exploitation of children in Western acting circles after serious allegations of abuse (or proven crimes like Salva’s), will almost always be taken up with far less enthusiasm.

And people wonder why others call Hollywood sick.

Read More: Liberal Hollywood Had Decades To Expose Harvey Weinstein’s Sexual Predation But Did Nothing