The Mosou: A Matriarchal Dream or Aberration of History?

The Mosou are a civilization of around 30,000 people situated around Lugu Lake, roughly 30 miles in circumference, tucked away high up in the Himalayas  in Southern China. 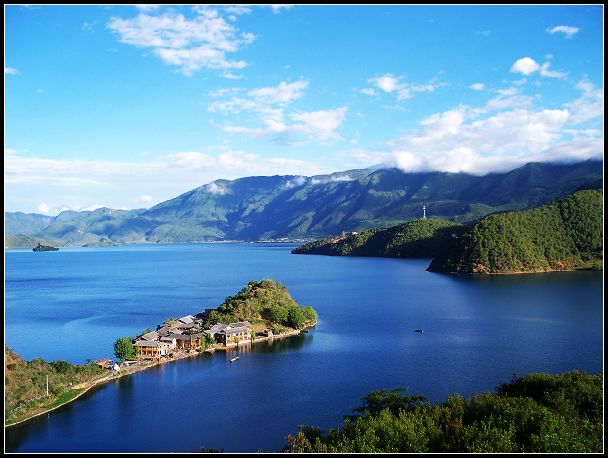 They settled the land sometime around 1500 years ago, according to documents from the ancient Han Dynasty. They have had precious little contact with the outside world – the Yuan Dynasty garrisoned troops for a time in their lands, as the Mosou have a practice of “non-resistance.” They had no standing army or possess any weaponry as a result of their pacifistic tendencies. While the men of the society did engage in trade with other cultures, they did so on what was known as the Tea Horse Road, or the Southern Silk Route – other cultures did not come into Mosou lands – until recently.

The second notable encounter was when the communists seized control of China and they sent anthropologists and government officials to scour the land for all inhabitants. The final encounter was in modern times, as many other nations took an interest in the Mosou; most of the interest has been generated by all manner of left-winger, including feminists.

A Society Of Matriarchs

The Mosou are famous for being representative of a matriarchal society or a gender-equal society. While the society, from an anthropological perspective, is considered a matrilineal society. Men used to make up the highest level of society, but that has been worked out for centuries. Women are the face of power in Mosou society.

Regardless, this is the apex of a matriarchy. While the West may resemble some sort of matriarchy – especially at the bottom – the Mosou are the society that revolves around women and women’s sexuality. A family’s lineage is traced through the side of a female. A male will always belong to his family – the leader of which is a woman relative. They have no appreciable advances of technology in their history, nor any intellectual achievements of any stripe.

Truly, this was and is a society a society frozen in time, a beneficiary of severe isolation – a civilization that should have been ground up and tossed aside into the trash heap of history. Now, this aberration exists as a sort of utopia for gender equalists.

A review of the sexuality, marriage and child-rearing is necessary. Simply put, there is no marriage. No formal vows and no formal recognition outside the general knowledge in the community that a woman is mating with a man, or a male is a father of a particular child.

There is a popular misconception that there are no fathers in Mosou. That isn’t right, but it would seem that way from the West’s perspective. Once a child hits puberty, like any society, there is a series of rituals engaged in by the community to celebrate the child’s growth into an adult, both for boys and girls.

Girls are given a room in the family home (which is a compound comprised of four separate structures) and boys are expected to come to the girl’s home and woo her – this is what is referred to as a “walking marriage.” Boys are allowed to come and go purely at the girl’s discretion. The process is generally referred to as mutual love and affection; but it is purely a function of a female’s lust towards a particular male. The process operates purely at night – always. The wooing process is often non-aggressive on the male’s part. They may throw rocks at a girl’s window; they may linger outside the gate to the family’s home until he is called in by the girl. While the matriarchs of the family – a single, usually elderly female, referred to as a “Dapu” may veto a particular male, it is rare and the young female is in control.

The famous concept of the promiscuous Mosou female isn’t on point. The more appropriate term would be serial monogamy. Women often rack up notch counts right after puberty – obviously feeling out for alphas – but don’t usually reproduce until late teens. The father is usually known because the females weren’t having any relations with men they didn’t want to sleep with. However, since fatherhood is considered more a determination of the woman, she can pick out the man she desires to be the father – provided they were sexually active with one another (a context I picked up).

This process goes on at night – forever. While there is social recognition of sexual relations, the men only mingle with their sexual liaisons and baby mommas at night. After the day’s work, they travel to what village their female lives in. Early on, they may exclusively hang out in the woman’s room. After childbirth, the fathers or boyfriends typically eat with the woman’s family and engage in traditional familial activities – sometimes including cuddling with their children. If they retire to the woman’s room, there may be sex, maybe cuddling, or nothing. Regardless of what goes down, the man leaves at dawn for his own family’s dwelling, to begin the day’s work.

Mosou Men Exist For The Service Of Women

And so it goes for the traditional Mosou man. His mother or some other female relative is the head of his home into perpetuity. He will never live with a woman that is not related to him, he will never live in a room by himself – unlike females. What he earns, produces and creates belongs to his family – obviously the decision of what to do with it is made by his Dapu. He is involved very much in child-rearing – but mostly of children his female relatives conceive. There is definitely a gendered division of labor, as males typically do the heavy labor, traveling for trade or work, and the generally distasteful jobs. That is to be expected, as women are not wont for these sorts of jobs, nor are proficient at them. He will raise his female relative’s boys. Further, as one source astutely observed, “Boys are not regarded more than girls, girls are actually preferred.” Three cheers for gender equality, eh?

The research I read had a bizarre level of praising the society for lacking competition, intolerance, etc. According to them, the society is a harmonious and equal society. Unsurprisingly, there is much praise for the lack of psychological issues, violence and unhappiness amongst the people. I don’t trust the veracity of these claims to begin with; however, the researchers clearly came to Mosou with rose-tinted glasses.

Not Quite A Utopian Society

I will tackle two common misconceptions that revolve around the lack of the word “rape” or “jealousy” in the language of the Mosou that will wrap up my review – and highlight the problems with the worship of the Mosou by feminists.

First off, the Mosou have no written language. As expected with a female dominated society, there has been no progress intellectually or technologically – although many sources emphasized their “rich oral tradition.” Further, there is a word for rape, it just is rare. As is most crimes. My theory is that crime exist because there is a real role in the culture for men, plus they are subjugated by the females in their family. There just are no examples of males competing against other males, plus there is little need to lash out for resources, because a man’s Dapu will provide for you.

As for jealousy, of course it exists. There is a word for it. Further, there are examples of conflicts between villages with the intrusion of the modern world into the Mosou’s lives. The articles I read most assuredly conveyed that it was the brute, capitalistic influence that brought jealousy and covetousness into the lives of the Mosou.

No. The Mosou are humans. They have feelings, which include anger, jealousy and the whole gamut of a human’s feelings. The general theme of harmonious, hand-holding bliss isn’t true. The fact there was and are elder councils where disputes were hammered out proves that there were and are conflicts. They just resolved them in ways that didn’t involve in violence – so what?

Women are far more likely to resolve disagreements through female channels – the subtle manipulation of power through language. Women get together and create or enforce hierarchies based on their ability to manipulate the other women – usually their own self-assessment of their sexual value comes into play. This is a very undeveloped point of my argument, so take it as you will.

However, the cracks in the narrative are apparent when you read enough about the Mosou. They are a female-centric, matrilineal society that creates for men a subordinate role based on being a workhorse for jobs women don’t want and which men women want to sleep with. Men do have a clearly defined role, and do get to see their children, albeit at the approval of the mother and her family – there were no examples presented of a man being denied to see his spawn, however.

In the end, the research I found was too protective of the sex lives of women to get a clear view of their society. This is very predictable. While there were weak exhortations that gendered labor divisions are not right, it was clear that the feminine imperative was in full force – guarding female choice of mate.

This is the heart and soul of feminism – unrestricted hypergamy. The fact women were not castigated for their choice of mate or inability to label who actually is the mate is repeatedly praised.

At any rate, this is the apex of a matriarchy. A stable society based on female sexual choice, male subjugation to a matronly figure and a complete lack of social progress. This was and is a society supported by their geographical privilege for their existence. That is what it is – a relic preserved in the mountains of southern China – a relic that so-called equalists are chasing as an ideal.

Read Next: How Young Women Promote The Hookup Culture